Are Nootropics the Answer for Neuro-Degenerative Diseases?

Dementia, the unfortunate deterioration of one’s brain. Across the World, rates of dementia are increasing with rising life expectancy. Right now, 1 out of every 14 people aged 65 or older are suffering and that number increases to 1 in 6 for those over 80. The worst part, we don’t have a cure. Currently Pharmaceutical options only cover the symptoms, meaning most continue to suffer even after diagnosis. Luckily we’re also in the age of rediscovery, as cultures from all across the World seem to already have the answer. That is, plants. These beneficial plants which have been used for thousands of years, may be what we need to solve the Dementia crisis. These plants in today’s World, are now known as Nootropics, and Nootropics have been found to not only protect against diseases such as Dementia, they have also been found to improve memory, concentration, and mood in Dementia patients. All without any nasty side effects, such as what Patients have to deal with when using Pharmaceutical drugs. So let’s dive in, starting with what causes Dementia in the first place?

Well according to the Alzheimer’s Society of Canada, there is a long list of factors all of which play a role in causing one’s brain to start deteriorating. Top of that list is our lifestyle. Smoking, drinking alcohol, and eating crappy food all contribute, so does social isolation, skipping the gym, and not using one’s brain, like someone who only watches the news all day. Other factors involve the environment around you such as the level of air pollution, and your genetics. Some of us are more predisposed than others, unfortunately.

Quite often symptoms don’t appear until the disease has had quite a bit of time to do some damage. Usually it takes 20 years before dementia is noticed.  Not only does it take 20 years to notice, but our current selection of options for treatment only covers symptoms. Pharmaceutical drugs don’t actually stop the deterioration. They can only help with comfort, and in the usual case these drugs cause unwanted side effects. This can make compliance difficult. Patients often refuse to take their medications not wanting to go through the side effects. If only there was a better option.

Thankfully we are in the age of rediscovery. For thousands of years, cultures all around the world have been using plants in what we call today, traditional medicine. The particular plants used for brain health are also referred to as Nootropics. Now nootropics have been the focus of study for the last decade despite already being in use all around the World. And the best part is, Research has proven that they actually work. It seems the days of only treating symptoms may be over. Let’s look at what the research has to say.

Up first, we have a study done on one of the most popular Nootropics on the market. Lion’s Mane mushroom. A wonderful Nootropic, which is a great way to help with those long nights of studying, or to help repair brain damage. Lion’s Mane works by containing a pair of proteins which our bodies use to promote Neurogenesis, which is the process of creating new nerve cells. Using a double blind model with placebos, a study was conducted using 50-80 year olds who were all diagnosed with cognitive impairment. The study found taking Lion’s Mane three times a day showed remarkable improvements in their cognitive abilities. With the one downside being that once they stopped taking Lion’s Mane for 4 weeks, the improvements began to diminish, thus anyone using Lion’s Mane will likely have to continue using it. Currently, Lion’s Mane is a strong contender for a Neuro-protective treatment, and is being considered for treatment for Dementia, although it is stated that more research is required before they can be conclusive. One of the best things about Lion’s Mane is the lack of side effects. The only thing you have to worry about is if you’re allergic to mushrooms, giving Lion’s Mane a serious advantage over Pharmaceutical drugs. Source. 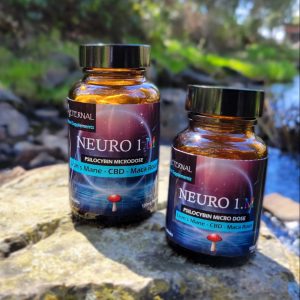 Another option being studied is Psilocybin, another mushroom although this one is psychoactive thus it won’t be for everyone. Again due to Psilocybin’s ability to promote Neurogenesis, improve Neuroplasticity, and reduce Neural Inflammation, it is being looked at as a possible treatment for Dementia, especially with Microdosing. So far the research is looking positive, although it is still early. The best part of Psilocybin is that unlike Lion’s Mane the benefits tend to last longer with 6 months of benefits after one month of usage being the typical minimum. Source.

Having Microdosed many times myself, I can say I certainly feel massive improvements to my brain’s functioning, thus I am closely paying attention to the research as it comes out. I truly believe Psilocybin is going to be the best option for people suffering as we study this magic plant more in depth. Microdosing makes it easy too. Now you don’t have to trip out to receive the benefits. The only concern I can see for the elderly is panicking if they forgot what they took, thus Psilocybin treatment will have to be monitored.

Here’s a link to our Article on Microdosing if you’d like more information.

Those aren’t the only options either. There are many plants which can help your brain’s health and wellbeing. Two others are Ashwagandha Root, and Ginseng.

Ashwagandha helps by reducing cortisol levels. Stress tends to be a major factor in our brain’s health, and high levels of cortisol activity can actually cause the brain to shrink, thus by taking Ashwagandha you will be reducing inflammation in your brain, effectively promoting Neurogenesis. This makes Ashwagandha an excellent choice for treating Dementia, which may not only promote neuron growth but will also tackle the symptoms from neural degradation such as memory impairment, concentration, and the ability to learn. Source. Source.

Ginseng isn’t for everyone but it can help by improving concentration and stimulation just like caffeine. Only with ginseng you won’t have the deterioration of the protective layering of your brain cells, that is the myelin sheath, which happens when you drink too much coffee. You just have to be able to handle having energy all day long. In fact ginseng helps to improve the health of your mitochondria giving you healthier levels of energy making it easier to live a healthier lifestyle. It just tends to last for 8 to 12 hours, and compounds with continued usage. Source. 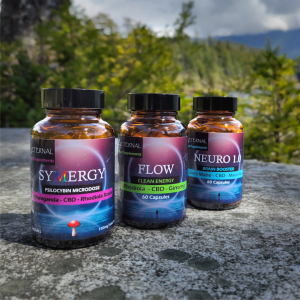 So there we have it. At our present time with the ever increasing rate of Dementia cases caused by an increasing age of life expectancy, it may seem we are stuck with this problem, especially if current treatments only cover symptoms. Luckily it seems plants may be our salvation. Not only can they help, there are options. Maybe Psilocybin will help regenerate one person’s brain, while Ginseng can help another live a more active lifestyle. The one thing all the researchers say again and again within these studies is early treatment is best. Not just the best, but absolutely necessary. Prevention is the true solution. It is best to start living a healthier lifestyle now, before the brain starts to deteriorate. That being said, they all say it is never too late. Even once the brain has begun to deteriorate there are options. Plants can help alleviate the symptoms and can help repair the damage, improving the lives of those suffering. Quite frankly, to me, the Future looks bright. As we move forward utilizing these plants which have been in use for thousands of years, diseases such as Dementia might only be known to the history books. We could literally eradicate Cognitive Decline, if one chooses to use the plants available. Personally I love Nootropics. I know they work. My life has only improved since my journey into discovering the magic these plants have to offer began. Thus I leave you with some wise words I’m sure you have heard before,

And the thing about knowledge is that if your brain isn’t functioning right, it is useless, so start today. Take time to learn how you can improve the health of yours or maybe a loved one’s brain. It will change your life. I can guarantee it.

Before taking any new supplements or herbs always consult your Doctor for a personal evaluation.

Thank you for reading, if you have any questions please feel free to message us either through the website or through social media. We are here to help.

Proudly shipped from the Sunshine Coast of beautiful BC, Canada.

You must be 19 years of age or older to view this site.